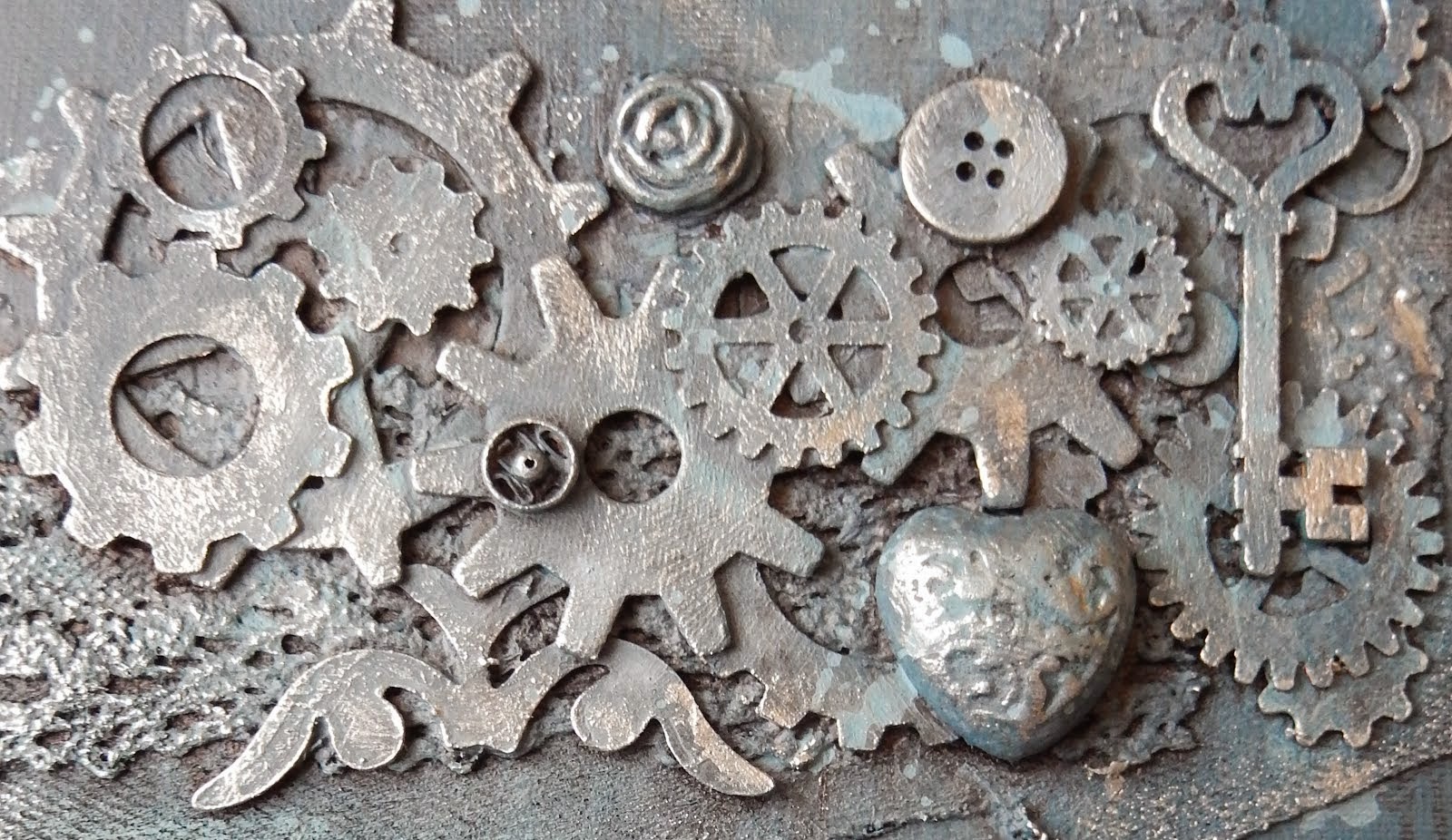 I got a bit carried away with this months swap.  Inks, Chunky glitter, acetate wraps......

This months swap was Myths and Magic.  I made five cards the same, entitled 'Fairies at the Bottom of the Garden' 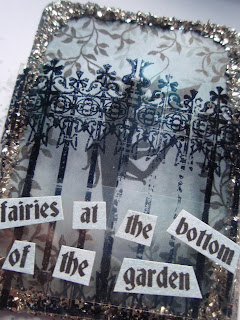 For the cards I had a play around with some new products purchased at a couple of craft shows I had been to recently.  IndigoBlu Pastel Perfect Stamping Card and Stampendous Frantage Crushed Glass Glitter.

IndigoBlu described their card as 'Deliciously Smooth...' and it certainly was.  Ink went on beautifully and it was really easy to stamp on, with a weight of 350gsm it is the perfect weight for this type of project.

I used a couple of colours of Distress ink for the background (Iced Spruce and Black Soot) and stamped the vines around the edge of the card with these as well as Versafine Onyx Black, doing second and third impressions from one inking so they varied in shade.  The fairy was stamped with Versafine for a clear image. 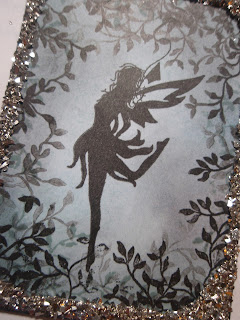 I played around with how to best stick the crushed glass glitter for this project.  Trying PVA and clear glue, as well as melting into embossing powder, before deciding on sticking with silver stickles glitter glue, giving a mixture of small and large glitter pieces, which worked really well. 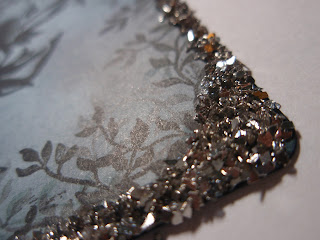 The garden gates were stamped onto acetate with permanent ink (Staz-On, Black), scored and stuck to the back of the card. 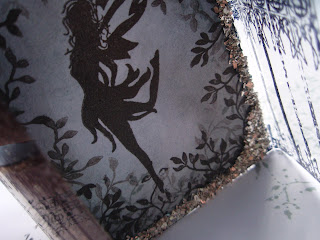 To finish the card, a mechanism to keep the gates closed - an acetate wrap secured with an eyelet.  This was decorated with words printed from the P.C. 'fairies at the bottom of the garden' coloured to coordinate with the ATC background. 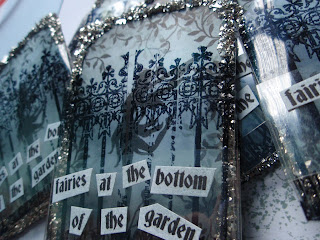 Posted by Crafter's Laboratory at 23:37 No comments:

Cards - A Selection from the Year So Far

A small Ecoboard tile (inchie) stamped with Crafty Individuals stamps and coloured with Distress Stains and mounted on a little collage of stamping, including 'one of a kind' postal mark from Stamping All Day on a DL Kraft brown card blank. 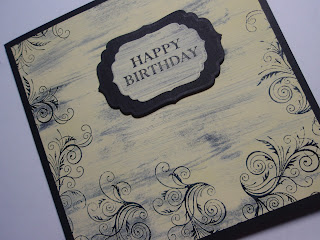 I made a fair few '40' cards this year I made some of the same cards in different colours using the techniques shown in the shabby tag tuturial, a clear embossing resist for acrylic paint.  Along with some Nestabilities and number dies or happy birthday stamp to finish.  All unique no matter how many I made, thanks to the paint effects and the random stamping of the flourishes.

A really simple but effective use of torn coloured paper, outline stamping over cream or red paper, matt and layering of the images and a rosette (prepared scoring with ruler and embossing tool).  Some final little details to finish; glossy accents over the cricket ball, a '7' inside the rosette and a random handstamped sentiment off-set to the right.


This card was C5 size.  I started by creating a watercolour wash of sky and grass for the background, with some grass stamped with watercolour crayon paint.  All other details were prepared separately and later glued in position on the card.  The horse is from an old Woodware stamp set.  One horse was stamped in the normal way and the one was prepared by picking up the ink from the stamp with a brayer and then carefully rolling the brayer onto card to create a mirror image of the stamp - that way I could have the horses facing one another.  The horses were coloured with watercolour crayons and pencils.


The bunting elements were created by stamping chalk ink with a diamond shaped stamp, cut in half and over stamped with a number 5.  The riding lesson post was cut out by hand.  I used real rubber to stamp the sentiment and 'riding lessons' text, so there is no way you can see to get them level - I usually resort to stamping them wobbly on purpose, then it's OK to be a little off!

Lots of co-ordinating fancy papers by K and Company were layered up to create this card.  A square, slightly smaller than the 144x144mm card blank was cut along with strip the same width and three sizes of Nestabilities (Labels Four).  Anniversary was stamped over a light coloured strip with a co-ordinating ink and matted onto the darker background paper.  This was stuck on the top die cut through the centre and trimmed by hand.  The die cuts and strip of paper was edged lightly with 'brushed corduroy' distress ink to give an aged effect and everything was layered up with Pinflair glue gel to allow easy alignment of the plaques.

Using clear embossing enamel as a resist is one of my favourite techniques and teaming it up with Distress inks makes it very quick and easy.  I used a new stamp from Inkylicious called 'Delicate vines' and stamped in randomly around the edges with embossing ink, sprinkled with clear embossing powder and heat embossed.  I then coloured the card with three colours of Distress inks; Bundled Sage, Frayed Burlap and Scattered Straw using foam.  I continued the random stamping of the leaves around the edges in the Distress ink colours.  To make the resist show through I buffed the card with kitchen paper towel.  Happy birthday was stamped and clear heat embossed, Distress ink in Bundled Sage was applied over the top, again buffing it up.  The panel was matt and layered with white and Distress ink coloured card in Frayed Burlap and mounted with foam pads in the centre.

Posted by Crafter's Laboratory at 16:07 No comments:

One of the other projects I was playing with over last Bank Holiday weekend was a leaving card for an Italian student, Debora I have been working with for the past few months.  During her stay we have been trying to show her that Britain has some great food and beer and Nottingham has some great places to visit.  We have also enjoyed working our way through the Wallace and Gromit short films.

I had a brief for the card, which a little unusual.  Most people that ask me to make cards, know my work and just tell me to get on with it.  This one had to be A4, have lots of 'stuff' she has experienced since being here on the front as well as a 'Wish you were here' postcard of Nottingham.

How do you create a piece of work with so many elements and not overdo it?

I started off with some card, slightly smaller than A4 and applied strips of different brown papers, trimming the excess from the edges once the glue was dry. 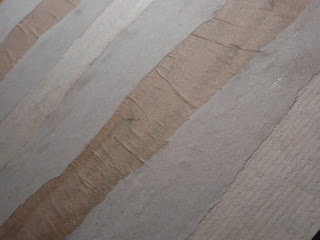 I knew Debora was a fan of the 'Keep Calm and Carry On' image so I used that stamp along with a union flag, English postal mark and London Bridge ticket - all in sepia Versafine ink (permanent ink) randomly all over the papered base card. 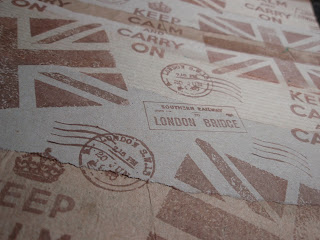 To complete the 'paper blended' background and tone it all down, I applied two very thin coats of white gesso over the top.  This gives a pale whitewash effect. 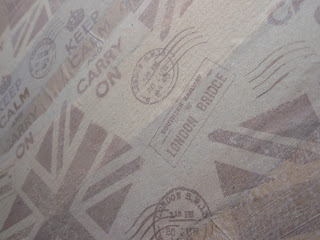 While the gesso was drying I got to work on finding some images for the background.  Printing off some random images from the internet of Robin Hood and other Nottingham sites, baked beans, cheese, local beers etc. I cut them into triangle shapes, not necessarily the whole image, often just part of it.  Some of the images were more easily identifiable than others. 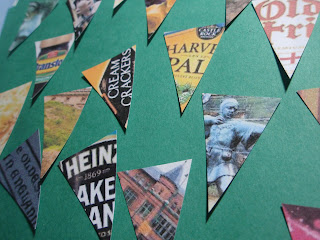 I applied the triangles from one side of the card to other to give the effect of bunting.  This way I was able to get all the different elements required on the card and bring them together without making it look too busy (hopefully). 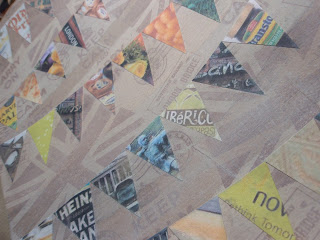 One final thin application of gesso over the top of the bunting, gluing the background to the base card, positioning of the postcard with kraft photo corners to the front and the card was finished.  Hopefully I fulfilled the brief! 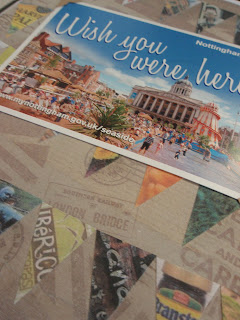 Posted by Crafter's Laboratory at 14:22 No comments:

A rubberstamping, papercrafting addict who loves to experiment with all sorts of materials and techniques in the hope of creating something fabulous!
Hope you enjoy my crafty blog,
- Alex 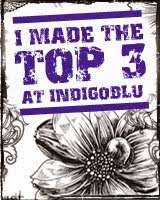 Fill out my form!